skip to main | skip to sidebar

Too many weeks have passed since the last entry in this blog. I apologize to all my readers and blogger friends. Having "disappeared" this way is unfair, our Freedom Fighters don't deserve it. Therefore, I'll try to relaunch mi blog starting today.
And there's no better way, I believe, than to join this new initiative in favor of the release of Cuban prisoners. In this blog you will find a link that will allow you to join too by signing up electronically. This way you can demand from the Cuban government the immediate freeing of these civic heroes.
After I signed today there were more than 30.400 electronic signatures stored in the site. Congratulations to those responsible for this campaign. If there's anything I can do to help besides publishing this entry I would gladly do it.
Also, the OZT blog has posted today an important letter signed by Latin American intellectuals and Human Rights (HRs) activists. They want their own governments to demand Cuba the release of the Cuban prisoners. The letter contains key information about the HRs in the Caribbean island today. It is a great reading.
There's little doubt that most governments in our continent have always been, in the best of cases, passive about the lack of HRs in Cuba. Moreover, it can be said that the question for the respect and development of HRs in Latin America has been and still is a failing subject. Our continent presents lack of security for its citizens, and this has been an ongoing situation since almost the foundation of the Latin American nations themselves.
I'd like to believe that this letter can actually do something about it, and that our governments would realize the significance of such demand to the Cuban regime. Nevertheless, I'm afraid it won't happen this time. Let's not forget the fact that while Orlando Zapata was left to die in a Cuban prison our Presidents, including Raúl Castro, held a summit in Playa del Carmen, Mexico, in where once again Castro's regime was not questioned at all, and was well received by all delegations.
To all these prime ministers I warn you: Be prepared for, just in case. We can't feel satisfied with what we already have. Being conformists or, even worst, flirting with dictatorships is a direct betrayal to democracy. HRs and democracy have always been under pressure. We, Latin Americans, know this better than anybody when, having chosen the wrong political candidate, this person can make disappear all liberties granted by the Constitution he or she can change almost without opposition, and with the approval of "convinced" masses.
As long as this kind of abuses can be perpetrated and normally allowed in our countries, little can be done for the fostering of HRs in our area.
Publicado por Josema en 21:33

Watch videos at Vodpod and more of my videos 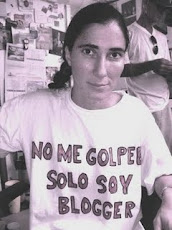 Listen to African Women In Eu on Blog Talk Radio